Drop me a note

eternal sunshine of the spotless mind 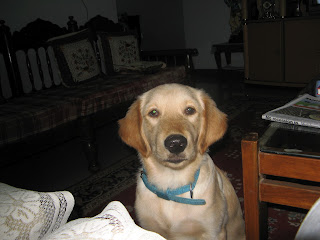 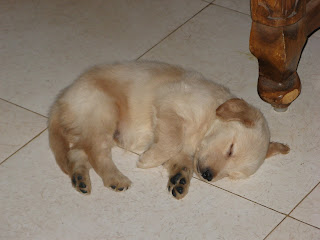 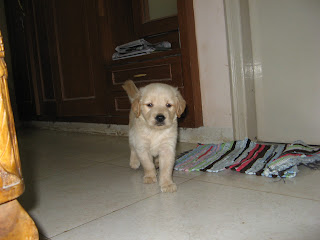 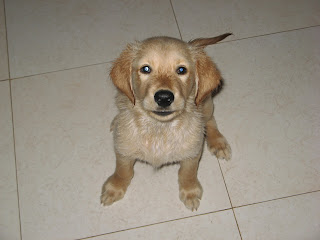 On the above mentioned poetic note let me just say

I for one never had a pet during my formative years and was scared of all four legged carnivorous creatures and would never go within a kilometers distance to residences which housed them. Dogs as pets was a complete no no which  followed a linear and  a common thread in my family  due to the dog bite suffered by my sister during her third year of existence . I don’t know if it’s a brainwave but I just felt that a dog was needed to complete our family , not the typically ferocious one which would jump on sofas and expose the springs for all and sundry but the chosen one which was a puppy and then grow into a dog. Little did I know what I was getting into ….
Circa four summers back based on a random whimsical fight between the mrses and me  where we tend to agree to disagree on anything and everything was borne the desire to get a four legged canine as a friend for life. It was subsequently followed by a phone call to the 21st century’s version of yellow pages (a familiar search engine) and after a few more phone calls to educated references a meeting was sought with an established dog breeder. The breeder suggested a golden retriever /Labrador would be the best bet taking into account the financial disposition, the geometric proportion of the apartment one resided in, the enthusiasm and excitement displayed by the future owners ( which we had in abundance).  The car ride to the breeder’s farmhouse was not a breeze from any stretch of imagination but the less than lush greenery and the small lakes with barely there water was a sight to be -hold for us  small towners. The farmhouse was situated in the hinterlands of Bangalore and one had to go through an assortment of muddy, un-tarred, rickety and worn out roads which tested the four wheel hatch back and our digestive systems steamrolled into one. The dogs were nestled in a gated enclosure with four cages adjoining each other managed by a gurkha predictively named bahadur. The breeder in her characteristic wit and candor sold the ice to the Eskimo and now the Eskimos needed to decide whether they would bite the bait and go for the kill.

During the drive back home my mind was going through the ramifications of our decision in adding a four legged doggie to our ek mein aur ek tuu family. I showed an extra inclination to talk to friends and office colleagues and random strangers who owned golden retrievers to gain a sensibility around it. The all round advise on golden retrievers was well meant bordering on “loving, evenly balanced personality, genteelness with children ,lack of aggression and the clincher – its ability to please. The conversations at home was centred around our readiness and the willingness to share responsibility once the pup logs in.  We did face a barrage of questions from our parents from both sides and were prepared none the less for the same.  We just believed in the simple but very profound line “one for all , all for one” which would help us wade through troubled waters. Since we were looking for a golden retriever  pup .. the wait it was a wee bit longer as she to be transferred bag and baggage from Kolkotta.The pup was flown down on the appointed day.
The  first few days were interesting as the occupants including the domestic help of the house and the pup were warming up to each other and boy did they get along. The pup on her part was acclimatizing herself to the new surroundings, banging  herself against anything which moves (think Charlie chaplin in one of the silent movies slipping on banana peels, the only difference is the pup did see stars)and also trying to gnaw and eat anything which moves. She was aptly christened Sunshine because of her thick golden coat and the shine it emanates. As expected came the  demarcation of the responsibilities – the Mrses taking care of the hygiene and the dietary habits while yours truly will oversee the daily ablutions and the pit stops, which incidentally has remained the same till date. It did not take much time for sunshine to enter into our everyday conversations by subtly plonking her weight bang in the middle while we were discussing anything random to steadfast serious  ( not that it mattered for her) I guess it sprang forth from her deep desire on not to be left alone and the feeling of insecurity. During her growing up years , she did face trying times with her health and ailments related to her eyes and legs and being put on drips in the vet hospital.( one step away from breathing her last) Yes she scaled through and is  as fit as a golden retriever should be. She has travelled far and wide down south with us ranging from the idyllic getaways of chikmangalur  Chennai and  the green vegans  of kerala by not taking the passenger seats but plonking herself on the dicky of our erstwhile hackback without even a whimper and eyes which says “ lets get on with it”. I dare say she quite likes the stairs of Chennai and the lush green open spaces in kshemam .She is game for a game of ball and fetch and most recently the boomerang at any time of the day and night.  She is the first one to jump out of the house and the first one to get in (and we thought she’s an animal who likes the greens!)if she senses there’s an outing on offer. Sunshine totally abhors going to the vet (pray who likes going to the doc , being injected by an obnoxious looking needle and administered funny looking medicines) Sunshine is a social animal to the T and it doesn’t take a nanosecond of time for her to befriend anyone judging by the number of followers she has from our extended families and the mass exodus of human beings around. She wears a permanent badge of optimism, cheer and determination ( I guess that’s what her epitaph would also read) I did surprise my mother( who was very scared of dogs and still is . she does have a relationship with sunshine which borders on touch me not , but gets all the food and attention the little moppet deserves) once who is well settled in kerala by landing up at her doorstep with sunshine in tow( yes we travelled 8 hours together through the sweltering heat and dusty climes   when the mrses was on a office visit overseas and yours truly was on office leave) we did have many an interesting conversations on the way what with stopping for watermelons en route and to think  the villagers thought we were zombies and thinking the dog was an alien with the way she devoured the water melon.

The joy of having a golden retriever as a pet is manifold. You get to befriend more such families  , get an innate understanding of their social behavior, it’s a lot like bringing up a child , understanding their whims and fancies and the deep seated innocence they come with.  I feel the most interesting part is sunshine lives in the present not the past or the future (which  all the self styled gurus and  spin doctors have been harping on ) which is judged by the way she react  when she sees us you after 10 minutes, 20 minutes , an hour , a day  a month or even a year .. it just doesn’t change and is quite awe inspiring. We are privy to this spectacle every day and it sure makes a poignant sight. Her social skills are exemplary and she doesn’t know where to stop with all the fondling and the petting. Her snoring is killer and is perfect sync with the Beethoven’s sixth symphony. The awe inducing moments are many but the one which tops my heart is the warm button like eyes which express everything she wants to say without trying too hard as she is a very reluctant barker Her hand eye coordination is magical much like the Chris gayles and the virender sehwags and the vast array of golfers with the perfect golf swing.I strongly feel  tomatoes are her achillis heel aka biggest weakness and there have been days when she has devoured a dozen oranges  on the go giving me tough competition.

On this cheerful moment let me quote john grogan  which is so very raw and true.
A wise man once said -A dog doesn't care if you're rich or poor, educated or illiterate, clever or dull. Give him your heart and he will give you his “

Spoiler Alert- I may have gone a little overboard on sunshine but then for all the dog lovers out there, you just cannot get enough of them can you?

Sunshine loves everyone and everyone loves her... I can't imagine otherwise... when door bell rings - she runs in as if to open it, when the fridge door opens - she comes in to check whats in store for her, she comes to the balcony to say goodbyes to me... just love her coz she always and always loves you unconditionally.

Sunshine's simply awesome. The very name 'Sunshine' brings a feeling a warmth and fuzziness. The moment she puts her paws on your hand and stares in to your eyes bring a feeling that is so not explainable, like she knows and understands something in you that nobody else does. For someone who was never fond of dogs since childhood, thanks to a wild stray that scared me to death and scarred my for life, Sunshine was an eye opener! She ll always remain special to all at HQ.

Completely agree! Sunshine is my first doggie love. Truly a GOLDEN GIRL! Most social and well mannered. The good part is she'll never lose her innocence and never grow up. And yes you can never go overboard talking about her.

sunshine ....unexplanatory she is.Many a times i wonder had she somehow grown up with rabbits for her love for carrots.Her sparkling eyes emit so much that you just cant keep but cuddle her.She is loved by all as rightly said(including the big dog across the building who barks like " i am the big daddy here").She is our good little idli vada eating sunshine who rules at HQ.

Loved every word! I could imagine the pure love and joy as you wrote this! Sunshine has been my very special guest till date and must say much more well behaved than many two-legged guests! One just cannot go overboard talking about them. They definitely are a part of us - the pure innocence that keeps one sane in this chaotic world!

sunshine, sunshine and sunshine... how could one write so much about a pet..? I am sure not many will be able to write this well about their own kids..this is testimony of the love that you guys have for her and importantly vice versa..it sure proves that pets can be lifetime companions..Did enjoy reading it Shekar & again the comparisons that are done across are too good... (had to refer google a lot of times) lol

Very well written shekhar .. I love the way dogs reciprocate with their emotions and loyalty - and you have captured it really well .. almost want to keep a dog for myself :)